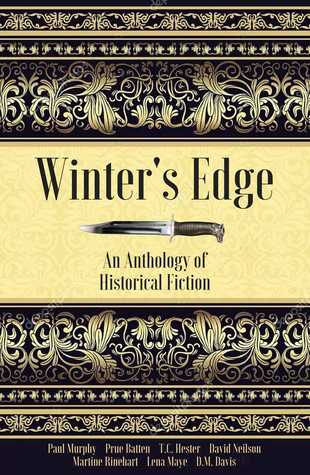 Winter's Edge includes seven stories written by seven authors in a literary “Where’s Waldo.” The stories recount through time and across the globe the travels of three daggers, which were forged in sixth century Rome. In each story, set in a different century and a different place, one of those finely-crafted daggers, each with a silver, snarling wolf’s head atop the handle, plays an important part in the experiences of characters who come alive on the page (or screen, if you will).

Paul Murphy’s “Wolf of Saturnalia” introduces the daggers in an action-packed adventure in ancient Rome; “Vielle,” written by Prue Batten, puts a dagger in the story of a twelfth-century musician in French King Phillip’s court at a time when tensions were high between England and France; T.C. Hester offers “DiPaolo and DaVinci” in the sixteenth century when the famed artist uses one of the daggers in the service of life; “Sweet Nightingale,” by David Neilson, features his eighteenth-century heroine, Sophie Rathenau, once again solving a crime in Vienna in which the dagger makes a surprising, but satisfying, appearance; “Bingley and Darcy,” by Martin Rinehart, fills in details of the relationship between Mr. Bingley and Jane Bennett which are missing from Jane Austin’s Pride and Prejudice; in the Kansas Dust Bowl of the 1930s, the dagger makes an appearance in a stunning story of friendship, love, and survival by Lena Maye; and, finally, in present-day New York, the three daggers are re-united in “Warm Me Softly,” a gentle love story by D.M. Davis.

This anthology is cleverly conceived and expertly rendered. Very impressive work from a stable of fine writers.