As I near the end of my current work-in-progress, The Clay Sustains, the third book of The Clay Series, I have arrived at the chapter wherein I will “solve” one of the greatest archaeological mysteries from the Hohokam era in the Tucson Basin.

In 1949, a man by the name of Ray Romo was hunting in an area of what is now Catalina State Park, near Tucson, Arizona. When the ground collapsed beneath his foot, I can only imagine he knelt down to examine the resulting hole and “peered into the past” (Swartz and Doelle, “The Romo Cache and Hohokam Life,” In the Mountain Shadows, 27:1, Archaeology Southwest, 1996 and 2013). 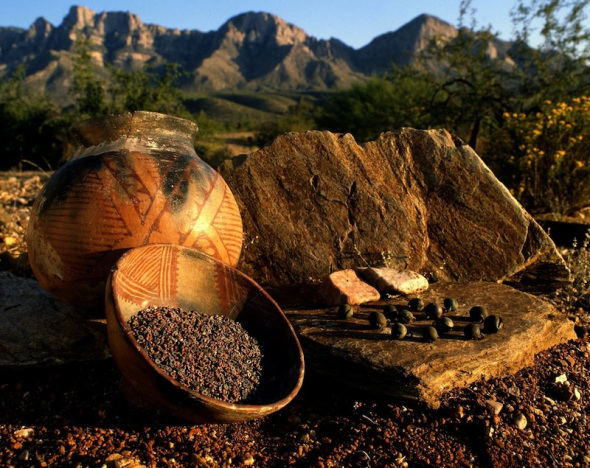 We are blessed that Ray Romo was an honorable man who did not keep this treasure to himself. Instead, he apparently offered it to someone in the field of archaeology–I’m not sure who–but the fact of its existence has been preserved as an incredible find about which there is no clear story.

Archaeologists have dated it to the Hohokam era, possibly between 950 CE,  when the Hohokam population began fragmenting, and 1150 CE, when the Hohokam would soon vanish from the Tucson Basin. My book, The Clay Sustains, takes place between 1158 and 1162, a time when many had already left the area and others would soon follow.

Speculating on its origin and purpose, archaeologists Emil Haury and Carol Gifford suggested it might have been some kind of offering through which those who had collected these treasures sought a blessing from their gods or to secure the welfare of the village.

Altogether, the beads weighed three-and-one-half pounds. The black ones (representing  40% of the collection) are made of steatite or talc; the red ones (58%) are made of “ferruginous aphanitic matrix containing quartz grains.” There are blue and green turquoise beads (about 2%), as well. Some of the beads show signs of wear, indicating that they might have once been used to decorate clothing. The origin of the copper bells has been traced to Jalisco, Mexico, more than 1200 miles to the south.

One can only guess that this collection represents great wealth, but, to my thinking, it is unlikely that it all belonged to one person or even one village. If it was, indeed, an effort to secure the blessings of the gods, Mother Earth and Father Sky, for example, what is the story behind it?

I propose, in The Clay Sustains, that because it is a time of trouble, with some years of insufficient rainfall, if not a severe drought, the people believed they had been abandoned by the gods. This belief is encouraged by an unscrupulous shaman who has his own ideas about the fate of this collection. He has called together the shamans from other villages and proposed they collaborate on an offering to save them all. As a group, the shamans carry the treasure to a hill from which many of their villages can be seen. They bury the treasure with great ceremony and then return to their villages in the hope that the gods will again smile on them.

But what if the shaman who engineered this collection plans to go back and get it for himself? Who will stop him? Who will protect this treasure, leaving it in place for eight to ten centuries? Will my main character, Ha-wani, a “mere” woman interfere with his plans?

It’s an interesting situation to explore. And since the pottery shown with the treasure is red on brown with geometric designs, common to the era in which my main character lived, she might even have made it.  Just sayin.’

Look for The Clay Sustains in late July 2017.

5 thoughts on ““Solving” an Archaeological Mystery in Fiction”